In 1902, the writer Rudyard Kipling published Sussex, a poem highlighting the close, natural, and interdependent relationship between humans and the landscape, and I quote ‘So to the land our hearts we give,/ Till the sure magic strike / And Memory, Use, and Love make live / Us and our fields alike’. Greatly influenced by his time in India, Rudyard Kipling had a deep appreciation of the ancient continuity of place and people, something that he brought to Sussex with him, living first at Rottingdean, then at Bateman’s near Burwash. His description of the ‘lands as lie ’twixt Rake and Rye, / Black Down and Beachy Head’ evokes this appreciation, giving the reader a sense of the power of place, and ascribing almost magical qualities to the Sussex landscape. His words are visual, almost like painting, a sort-of wand waving that brings the land to life in your mind’s eye. It is these visual qualities of the Sussex landscape, brought to life by ‘Memory, Use, and Love’ that I will be exploring in my post today. I will be taking a closer look at the work of two different artists that depicted the Sussex landscape in the first half of the twentieth century: Duncan Grant, and Eric Slater (I previously wrote about Eric Ravilious here). Sit back, make yourselves comfortable, and join me as we wander in to the ‘fair ground’ of the Sussex landscape. 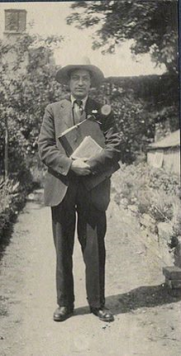 A Bloomsbury picnic at High and Over, Sussex.
So, let us begin by wandering down the garden path: the garden path at Charleston Farmhouse, to be precise, as seen by the painter Duncan Grant. Born in 1885 in Rothiemarchus in Inverness-shire, Grant spent much of his childhood in India and Burma. He entered Westminster School of Art in 1902. Along with Vanessa Bell, Virginia and Leonard Woolf, and John Maynard Keynes among others, Grant was part of the Bloomsbury Group, a sort-of collective of writers, intellectuals, philosophers and artists that came together in the first half of the twentieth century. During the First World War, Grant was a conscientious objector. After a first failed attempt to register as a fruit farmer in Suffolk, he eventually found a suitable position in Sussex, and moved to Charleston, near Firle, in 1916 (Vanessa Bell had managed to find the house). Here is Charleston today. ‘Duncan passed through a strange shaggy interlude,’ wrote Virginia Woolf of her friend, Duncan Grant, ‘but [he was] always and inevitably harmonious’. This sense of inevitable harmony is something we can see in Grant’s 1944 painting Garden in Spring. Like Grant, we stand poised on the patio, ready to go down the steps, pass between the ornaments, and walk down the path between the blossoms and blooms. In the centre distance, we can see a sculpture on a plinth, and if you look to the left of the image there is a peep of landscape through the trees. The harmonious scene in front of us gives the viewer an idea of the garden as a place within the landscape. It invites us to take our time walking down the path; in Living Painters the art critic Roger Fry described how ‘there is a certain lyrical joyousness of mood’ in Grant’s work, which ‘leads him to affect and enjoy what is beautiful in nature, and to express that delight in beauty in his work’.

This ‘delight in beauty’ can also be seen in Grant’s earlier painting Landscape, Sussex, produced in around 1920. Here, we are looking out at the gardens and landscape in front of Charleston Farmhouse. The pond in front of the house takes up much of the fore and middle ground of the painting; to the left of the image we see a farmer with what looks like a horse pulling a plough. In the background are the ‘whale-backed’ hills of the South Downs, featuring far more prominently than the peep of landscape in Garden Path in Spring. The simplified forms of this painting would perhaps suggest that it is more of an exploration of colour and looking. The art critic for the newspaper The Scotsman described in 1932 how Grant’s paintings are ‘charged with juicy greens, browns, and yellows’, how his brush ‘simply ripples over the canvas’. Grant emphasises the greens of the trees here and the yellow in the reflection on the pond here. The landscape around Charleston may have been simplified, but Grant’s painting still evokes a strong sense of place and landscape. Kenneth Clark said that Duncan Grant was an artist ‘who created their own world through the joy of the senses’. And that it is precisely what Grant has done in Landscape, Sussex: by highlighting colour and form, Grant has created his own world, and his own sense of place.

The timelessness, drama, and magic of the landscape is also conveyed in the work of artist Eric Slater. Despite being popular in his time, Slater is, perhaps, the least well known of the two artists I have been written about today. Slater was born in Hampstead in 1896, and after the death of his father Slater moved with his mother to Sussex at the age of eight. Initially, the Slaters lived in Bexhill-on-Sea and Winchelsea before settling in Seaford in 1929. A talented artist as a child, Slater attended Hastings School of Art, where he learnt a variety of different mediums. The move to Sussex had a profound effect on Eric Slater and his art; many of his prints are inspired by, or depict, the South Downs and the coastline around Seaford – below is his depiction of the coastguard cottages above Cuckmere Haven. Slater was an adventurous artist that explored print and woodcut techniques, but his work is often overshadowed by the work of other artists and designers working in the 1930s. Fellow Sussex artist, Arthur Rigden Read, taught Slater the Japanese woodcut technique, which was, at the time, an innovative method in the West. The Japanese woodcut process was introduced to Britain in the 1890s by Frank Morley Fletcher, who published his Wood-Block Printing – A Description Of The Craft Of Woodcutting And Colour Printing Based On The Japanese Practice in 1896. This book introduced British artists to the technique of Japanese woodcuts or ukiyo-e. It is entirely possible that Slater would have seen a copy of the book, he seems to have particularly enjoyed the woodcut process, eventually mastering the art form.

Though European woodcuts like Slater’s are much less formal than Japanese prints, Slater’s work was immensely popular during his career. Slater’s technique was revered, including by Campbell Dodgson, the then Keeper of Prints at the British Museum. Slater’s prints are beautiful and evocative colour woodcuts of a bygone era. For example, in his depiction of Seaford Head, Slater has recorded the buildings along Seaford seafront in the 1930s, set against the dramatic backdrop of the cliffs. Today, of course, the seafront is far more built up, but what Slater’s print therefore provides is a nostalgic image. It is an image that makes us think of the past when the natural coast was not as cluttered by buildings, what the travel writer Laurie Lee called the ‘whimsical rot of the Thirties’. By contrasting cliff, coast, and buildings Slater create a dramatic scene that also enables us to think about our place within the landscape. The representation of light also adds to the drama and the magic of the image: it is almost as if a squall is coming in to the coast, or there is a part in the clouds that allows the sun to bathe the cliffs of Seaford Head in a warm, yellowy light.

I hope you have enjoyed our wander through the Sussex landscape through the eyes of two very different artists, Duncan Grant and Eric Slater. Despite differing backgrounds, different styles, and different levels of popularity today both artists have used ‘Memory, Use, and Love’ to imbue the landscape with a sense of magic. Kipling may have wanted to give us a textual picture of the ‘fair ground’ of ‘Sussex by the Sea’, but perhaps Grant and Slater have made a more effective use of our senses – our sight.

2 thoughts on “‘So to the land our hearts we give’: Exploring Sussex in Art”